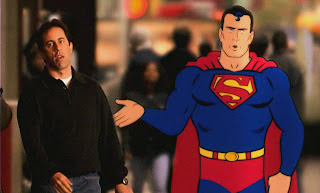 Well looks like its little triangles from the 90's for my Superman fix and MAKE MINE MARVEL TRUE BELIEVER! This is all in response to DC's response to fans in regard to their at best utterly confusing at worst stupid continuity. The info is from Big Blue Report no.142. Holy crap eh? what a bunch of bull! I have to say I expected alot more from DC than the whole, "accept it and move on, we know this shit makes no sense, but you as a paying customer will just have to deal with us lazy writers!" I especially like this "logical" explanation - "Ultimately, what I seem to be asked for a lot is an explanation of how this new stuff can be stitched into the old continuity. It won't be, is the main answer. As we roll along and explore the new world, you'll see more of the new world, and see how it fits together, not how it stitches into the previous world." - so in other words Busiek is giving us the heads up that "the DCU just won't make any kind of sense so don't try to figure it out because hell we here at DC aren't." I am hereby starting now beginning a protest, I am going to stop buying ALL DC comics that take place within the DCU (I will still pick up the Spirit because it does not take place within the DCU) !!!! That's right, you heard me, they just lost twenty bucks a month! So take that and shove it DC, when your books start making sense and showing up on time I'll start buying them. I fill in the space reserved for your books with World War Hulk!!! That's right, I went there! I think Superman, Batman, Green Latern, The Flash, all these heroes are awesome, so start writing 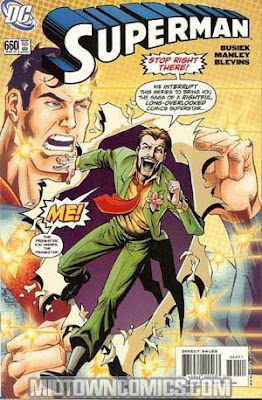 awesome stories for them. I mean look at Superman #660 and 661. YUCK!!! Horrible stories, the Prankster calls us all "ninnies" on the cover, you know you have a bad book when that happens!
I'm not too worried though, Marvel rocks right now, I know alot of people have a bee in their bonnet about how Captain America is dead, and Spider-man revealed his idetity to the world but guess what? Thats character movement in a forward direction, yeah, and I like it. So that's my two cents for now. You can subscribe to Big Blue Report and get the whole story from Busiek by joining the SupermanHomePage at http://www.supermanhomepage.com and signing up for it. I highly suggest doing alot of e-hanging out at SupermanHomePage, they're good people. Till next time citizens!!!!
Posted by Bobby Paycheque at 11:51 AM No comments: