Why the Silver Age was a huge improvement over the Golden Age.

Why do DC fans and creators the likes of Mark Waid, Alex Ross, and Geoff Johns all look to the Silver Age of DC Comics as their be all and end all era of comics? Well, have you seen what was on the shelf before? Here are some examples I've compiled to prove why the Silver Age was a massive improvement. 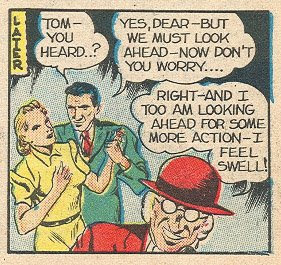 Madame Fatal: A figure taking on the terrifying and vengeful guise of... an old lady?!
And it sucks because: Not only would most criminals not give two sh*ts about an old lady trying to stop them, THIS old lady had a secret... she was actually a perverted middle aged man disguised as an old lady! In the panel from the comic you see on your right you see a man having a conversation with himself (bizarre), and it is revealed that Madame Fatal is "LOOKING FOR SOME ACTION" (WINK WINK!) and feels "SWELL!" (WINK! WINK!) It's a helluva issue, and it kept the kids coming back for an astounding twenty-two issues! 1940 was a weird time I guess. The panel below shows both the perverted strangeness of the whole idea as well as a reveal of Madame Fatal's convoluted motives.... enjoy. 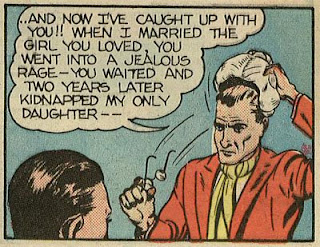 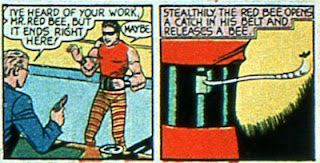 The Red Bee: Really just some random guy in gay pride colors with a bee gimmick.

And it sucks because: The Red Bee doesn't make any sense to begin with because bees are yellow. So right away we have a perplexing problem: if you are going with a bee gimmick, which is bizarre enough, why not be the Yellow Bee? Why the Red Bee? This is the least of the problems with this character though. Observe the panels on 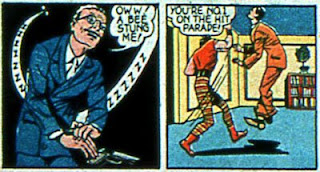 the right. This guy's arch nemesis could be
Rolled-up Newspaper Man, and the sad thing is
he would be a conceivable threat to Red Bee. Notice Red Bee doesn't unleash a swarm of bees, he appears to only have one. I can safely tell you if I had a gun it would take more than a single bee to take me down, but of course this is the Golden Age so naturally this crook is a cowardly weakling who can't take a bee sting. Nothing could make this now public domain character cool. 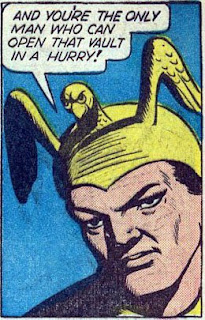 And it sucks because: Wikipedia says it best when describing this guy's origin. "The origin of the Golden Age character begins while Robert Frank is on a trip to Africa with his father, Dr. Emil Frank, where Robert is bitten by a cobra. Dr. Frank saves Robert by a transfusion of mongoose blood, and soon discovers that he has developed super-speed. Frank then decides to fight crime." I am pretty sure if I got a blood transfusion from a martial arts expert I wouldn't recover and find out that I am a total martial arts bad ass. So I am completely sure that if I got a blood transfusion from an animal that a) I wouldn't get powers, and b) I would probably die because... you know... I am human. Out of curiosity is it me, or is the rubber chicken on his head delivering this line?

The Black Condor: Raised by ravenous condors who didn't eat him for some reason. The Black Condor observed condors as they flew and somehow learned to fly without being born with this power or having any kind of wings or mechanism to, you know, fight gravity.

And it sucks because: If achieving flight were as easy as observing birds for a little while we probably would have done it before the 20th century. All the reasons this character sucks should be obvious. If you think these characters can compete with the Silver Age, you have a severe case of being brain dead.

Posted by Bobby Paycheque at 1:26 PM No comments:

Who watches the Watchmen? Alot of posers who finished the graphic novel yesterday, that's who! 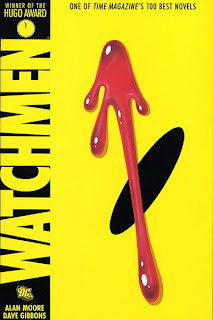 Watchmen enjoyed a decent opening weekend of $55 million dollars in ticket sales. What bothers me is about half of that audience is comprised of people who only finished reading the Watchmen graphic novel yesterday, and by extension, of course, are all experts on graphic storytelling and the works of Alan Moore, despite having claimed that comics are childish and stupid before the first Watchmen trailer hit the web. These faux connoisseurs of graphic storytelling are quick to point out that the movie left out parts of the graphic novel, and therefore sucks as a movie. Because, you know, Batman Begins and The Dark Knight are exactly like all the Batman comics ever written and didn't leave a single thing out of his mythos. That's why those movies were awesome! So shame on Zack Snyder (for some reason directors always take the blame for a movie's script, as though they wrote the thing) for leaving out all the weird EC comic tributes randomly inserted in the graphic novel, as well as Ozymandias' bizarre genetic research, the much more graphic scene of rape, the pages and pages of block text, and of course the giant alien squid. Because all of this would look brilliant on-screen, none of it goofy at all.

If you couldn't recognize the sarcasm in the last paragraph, then I am shocked if you can function in society at all. I call this poser audience phenomenon Lord of the Rings syndrome. Remember when Lord of the Rings was starting to look cool? Remember all those people who bought the books, read two and a half of the three and then said they were pissed because Tom Bombadil was cut out of the first movie? Remember those ass holes? Yeah, it's spread to the Watchmen movie now. So I ask of all people reading this blog (that's right YOU! All two or three of you), next time some jack ass claims that Watchmen sucks because it was different from the graphic novel by Adam Moore he/she read last week (yeah, someone told me they read the Adam Moore graphic novel before the movie, so that they wouldn't walk into the theatre ignorant of the source material. Good job!). Next time you see that person, ask them if The Spirit movie lived up to the Will Eisner comic of the same name, and enjoy the blank and ignorant expression that they will be incapable of preventing upon hearing the unfamiliar name of Will Eisner.... because all those so called experts on graphic storytelling that have popped up since last week have no clue who the man who inventing the graphic novel is. Because they are ignorant. Because they have no knowledge of the comic book industry or how it evolved (for even more fun with said ass holes throw names like Romita, Kubert, Ditko, The King Kirby, Schwartz, or Swan at them. Heck, ask them what they think of the evolution of comics from the Golden Age to the Silver Age and what changes the Marvel Method made to the industry) They are like a Christian claiming to be an expert on natural history. They have no grounds to complain about an adaptation of a story originally presented in a format they know nothing about. Next time you encounter these people, expose their ignorance and stupidity in front of all without mercy (preferably in front of other REAL comic book fans, perhaps the most unforgiving group of people on the planet). This is our duty. Till next time good citizens and REAL comic fans!